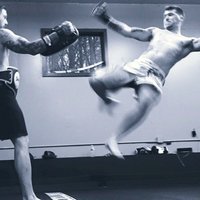 Welcome to my weblog (which most people call a "blog"). The opinions expressed herein are my own personal thoughts and opinions. Check back often for my musings and updates.

Feel free to e-mail me your comments on my entries or use our contact form. Thanks for visiting!

I have been truly blessed with many amazing teachers in my life who have shared their vast knowledge of martial skill and theory, along with existential wisdom. In terms of fighting strategy one of my teachers Master Yang Jwing-Ming explained the concept of Da, Ti, Shuai, Na.

To begin, Da literally means to strike with the upper body, such as punching, elbows, shoulder strikes, etc.. In addition, Ti is utilizing the idea of kicking or using knees at a longer or sometimes short range. Typically Da and Ti can be seen together in many stand up striking styles, whereas typically Shuai (wrestling) and Na (joint locks, chokes, misplacing the bones or tearing the tendons and ligaments are combined together to formulate most grappling based systems.

In many martial arts around the world a particular aspect of Da, Ti, Shuai, Na is emphasized creating a speciality in the particular style. When the martial arts spread from China to other parts of the world certain cultures and teachers capitalized on one to two areas, but did not place much emphasis on the other areas. For example, while western boxing is a tremendous fighting art, the sweet science specializes in Da, but no other aspects of true combat, such s kicking or grappling. Arts like Taekwondo, specialize in the masterful use of Ti, with a minimal emphasis on Da, Na, and Shuai. Judo and BJJ are two of the most amazing martial arts in the grappling world due to the fact that they specialize in Shuai and Na, but are limited in Da and Ti. Furthermore, Aikijitsu and Chin Na are arts that focusing heavily on the use of Na to control and restrain an attacker, but lack in the areas of Da, Ti, and Shuai although there is some Shuai training.

The majority of traditional Chinese Kung Fu styles incorporate the use of Da, Ti, Shuai, Na in all of their techniques and applications to provide a well balanced approach to fighting strategy. Of course Chinese Martial Arts are the root of most styles and the further a style moves from the original source the more it will change.

The beauty of speciality styles is these arts are quite masterful in their particular area of strength. Royce Gracie winning the original UFC demonstrated Brazilian Jiu Jitsu's Shuai and Na's effectiveness against strikers who had no true knowledge of this range. Whereas, many years later Matt Hughes the UFC Welterweight champion destroyed Royce Gracie's one dimensional approach of Shuai and Na using MMA (Mixed Martial Arts), which is the direct and modern application of Da, Ti, Shuai, Na in a sporting context. A well balanced martial artist is one who is proficient in all ranges.

While all martial arts are amazing and some will claim to be well versed in all areas, the truth is that most styles can benefit from examining their own style's strengths and deficiencies. Only then will we begin to work towards returning the true roots of martial arts and the efficiency of true fighting strategy through the effectiveness of Da, Ti, Shuai, Na.

Next time we will examine how Da, Ti, Shuai, Na work through the cycle of creativity and destruction within fighting theory.